Gearing up for SFFpit!

On Thursday, the #SFFpit Twitter pitching contest begins! I've decided to participate this year and will be sharing ten pitches for my MG SF verse novel, Bad Species.

I will parcel out one tweetable story bite per hour from 7 a.m. to 5 p.m. Central time. I would love any suggestions for improvement before then:

1. Pearl can’t escape the bygone bluster of blue sky humans who want her to care about their lost world. But born under Azuride’s green skies, she dares to dream of a future free of the ghost stories of a planet utterly alien to her: Earth.

2. Forget Earth. I don’t need some imaginary homeland, I’m here already I’m not wrong-born! But I wish those who sprang from this planet first didn’t reject all I am for the tell-tale traces of a different star I can’t hide inside my red, iron-rich blood.

3. Descended from the shipwrecked survivors of the Marie Antoinette, Pearl’s always taken pride in her heritage as the captain’s granddaughter. But faded grandeur won't change her future when humans have lost the stars and can only muck in blue mines.

4. Bad Species pursues a friendship never meant to exist between a human girl born millions of light years from the stolen world of her ancestors, and a boy from another planet who finds their chance alien encounter worth every danger.

5. Bad Species captures the end of human heart and mind with the loss of our mother body, Earth, through a 13 year old girl’s struggle to find her place on a hostile world where she can never be anything but alien trash.

6. Bad Species explores a girl’s journey to heal her family’s wounds and escape the gravity of planetary loss: “Sometimes, I pick a tiny blue star in the night sky and pretend it is Earth, praying for her mutilated ghost to find peace in the black.”

7. On her 13th birthday, Pearl discovers a forbidden heritage when she sneaks into the HIE Dome: the Human Immersive Exhibit, a museum filled with the last artifacts of her species. After she dares to steal a scrap back, she sparks a tiny rebellion.

8. Are we still human if we take all our human things away? Pearl’s name holds a tiny grit of dirt to remind her of Earth, but sometimes not even that is enough to salvage her worth when she can only be an “offborn” trespasser on her birth world, Azuride.

9. Inspired by the doomed voyage of Harry Martinson’s Aniara, Bad Species follows passengers who survive the void only for their children to risk losing everything. When each generation has less hope for survival, what kind of person do you become?

10. Bad Species chases a girl’s lethal wish for freedom on her 13th birthday: “My blood churns wild and raw inside me as I make it to the captain’s chair first—what is this energy, vast as starlight? I almost feel like a blue sky human: Invincible.”

My friendship with Elizabeth Pinborough began when we first met in a poetry class in our undergraduate college years. Our love of the written word later blossomed into Young Ravens Literary Review, an online venture we have co-edited together for fifteen issues now! I am very pleased to offer my own little review of her recent poetry collection, The Brain’s Lectionary: Psalms and Observations. 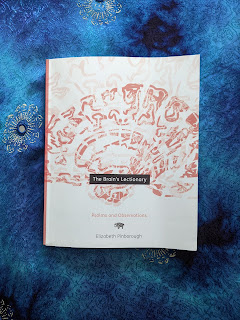 Pinborough takes the reader on a transformative journey through her experience with a traumatic brain injury, and the long road towards healing and a new understanding of herself. She reveals the deep yet delicate anguish of her harsh reality on the raw edge of her opening declaration, “I do not want to look at the beautiful things of the world with damaged eyes” (2). In each poem, she loops the shimmering beads of a broken necklace of dreams and lost expectations into sentences, carefully restructuring the pieces into new and exquisite patterns like “laminated pearl with memory” (45). While acknowledging the bitterness of her body’s impaired capacities, she also urges kindness towards her physical frame in “Today, be gentle,” reminding herself, “She has brought you here, by whatever means necessary” (21). For what cannot be wholly recovered, can still be wondrously reclaimed. As Pinborough meditates in “Perhaps my brain is a star,” life continues to evolve beyond wild borders: “Endless, quaking, scintillating with beingness, light and mind—consciousness—I am cosmos talking to herself” (14).