So, how does a dragon steal your heart?

For me, it was not a theft, but rather a thrill. Every ounce of imagination tingled and shot like a dream from my chest—straight into the illusion of wings, razor fangs snapping, cinders blasting, and rippling tail spikes curling serpentine across a page.

Perhaps I lost a bit of my heart to the clever malice of Smaug from Tolkien’s The Hobbit. I traded more pieces for cherries jubilee with the fierce yet sensible Kazul from Patricia C. Wrede’s Enchanted Forest Chronicles, and rides with Anne McCaffrey's dragons of Pern. I’m not ashamed to admit the hot tears that fell when Draco became a new star, or the wild rush of happiness I felt when Toothless pressed his head to Hiccup’s hand for the first time. And I am currently relishing the stubborn pacifism and diplomacy of the “nice dragon” Julius in the Heartstrikers series by Rachel Aaron. Each dragon that I have encountered in print and film has made me crave ever more glint of scale and fiery indomitable freedom.

Growing up, I spent countless hours drawing sketches of dragons. The earliest creations I can find all seem to characterize them as rather brutish creatures in the most traditional sense of a monster: 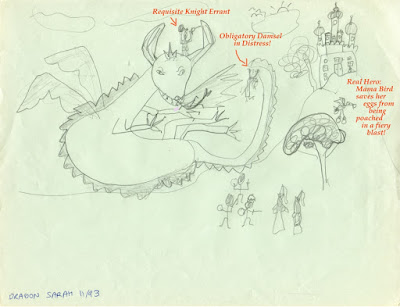 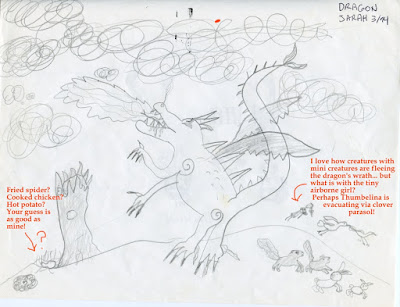 But over time, dragons evolved into creatures of sinuous symmetry in my art: 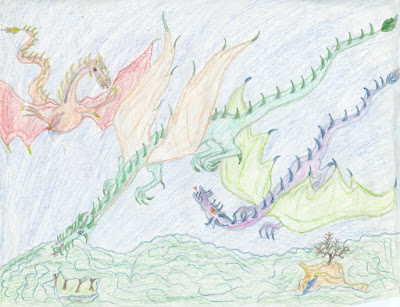 And I ditched the damsel in distress trope for fearless girls braving the skies them. 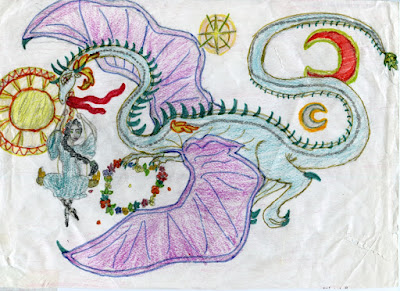 I suppose I love dragons because human creativity will never be able to tame them. They belong to themselves, and we just make up stories to brush our awe against their wing tips. 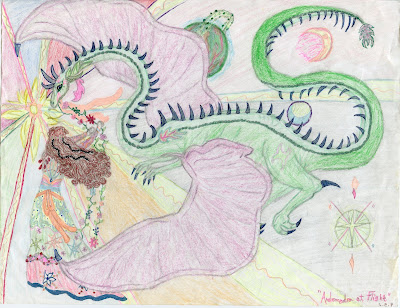 So what are the dragons, or other creatures of myth and legend, that spoke to you as a child and still stoke the embers of your ambition and imagination today?


To celebrate the official launch of my new novel Stealing the Dark Moon, I am sharing the full print cover art by the fabulous Audrey Bagley:
“There lie many ages before I rise, yet this magic twisted in your soul,
it was mine once. It should not have awoken
without me.”

Stay tuned tomorrow as I share how various villainous, erudite, feral, and/or stubbornly good-natured dragons have stolen my heart.

Day of Dragondom I: Stealing the Dark Moon Launch


I am proud to kick off the Three Days of Dragondom with the official release of my next novel, Stealing the Dark Moon: Dragon’s Den Orphanage Volume I! 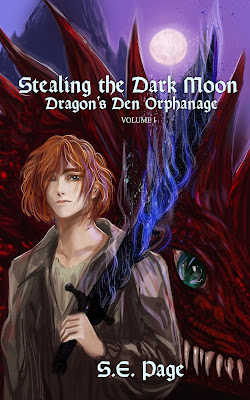 Fourteen-year-old Foxkit plays with fire by striking a bargain with the ferocious dragon Aerohim: Let six runaway orphans hide in his den in Galefang forest, and they will help him find a lost artifact in his vast treasure hoard. But the longer they search, the more Kit hopes they’ll never find it as the dragon’s den becomes the home he never had.

Kit’s wish is threatened when Aerohim starts growing weaker by the day and a mysterious girl, Sheen, warns him their dragon is dying. Sheen promises to heal Aerohim in exchange for one little thing from the hoard—the Dark Moon, a talon that once belonged to the powerful ancestor of all dragons.

But Sheen isn’t the only one hunting that ancient relic. Lord Ash, a fallen unicorn that harvests magic bones from other creatures to replace his broken horn, storms the Galefang. Not wanting harm to come to the only one that has ever treated him like family, Kit must decide whether or not to steal the Dark Moon. Steal it, and lose Aerohim’s trust forever—but just maybe save his life.
Now available on Amazon in ebook and print.

*If you buy the paperback, you can get the ebook for free. The same deal now applies to Iffy Magic, too.

Stay tuned for more dragon surprises tomorrow!
Posted by S. E. Page at 7:11 AM No comments: