Today, I am thrilled to bring you an interview with the illustrator of True Gossamer, the splendiferous Bonnie Bishop!

What drew you to Gossamer’s story?

When I was asked if I’d like to illustrate Gossamer’s story, I was given a draft with a bunch of picture suggestions. The draft was well written and as layered as any children’s book I’ve read. Gossamer was a fun character I could get behind. The suggestions for the pictures made sense. But there were two picture suggestions whose impressions stuck in my head and wouldn’t go away.

First I should explain: I don’t “see images” in my head a lot. It’s hard for me to imagine beforehand what something might look like in picture form. And if I do get an image of artwork, I often can’t replicate it (although I hope to get to that level someday). What commonly drives me to draw an image is a strong sense of what feeling I want to convey with it. Often when I begin with these impressions, I’m more fond of the pictures I make because they start to make sense as I work them out on the page.

The first Gossamer picture suggestion that inspired me was the description of the cover. It read: “A girl standing with her back to us. She has a long black braid with a huge sky blue ribbon tied to it that almost makes it look like she has floppy wings.” With that description, I got the impression of wind on my face while looking up at the sky. I felt like it’d be a morning sky and spiraling clouds. … Ultimately when I went to draw it I made changes that I think better suited the end result, especially given the need to leave room on the image for the title and other words. 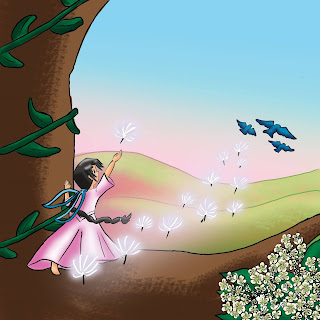 The second suggestion that inspired me was the lake picture. Its description read: “Gossamer in tiny gondola sailing over moonlit pond lined by cattails.” With that description, I felt a sense of calmness. The kind I get when I’ve gone for long walks along nature paths or when I’ve sat on the beach near my city or a lake further inland.  I even smelled a bit of the watery smell you get when you’re so close to those places: not salty but watery like rain. 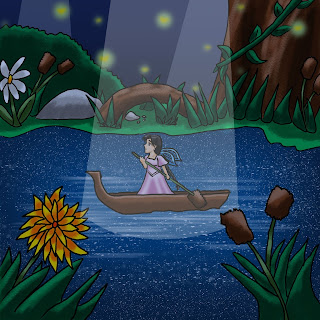 If I didn’t use those impressions to make the images for the book I might have done so in my own personal art — that’s how strong the impressions were.  But the writing was so colorful, and I felt like even if this was outside my range of experience I could manage it. So I said to the impression of Gossamer in my head, “Let’s do this.” I then sent my affirmation to you.

What picture was your favorite to illustrate, and why?

My favorite to illustrate was, honestly, the lake picture. It was actually the first one I worked on for this book. I mean, I usually don’t have detailed backgrounds in my personal stuff. But the description for that one was so simple and calm, and I’m a sucker for night time and lakes and quiet scenes — that kind of hit all the marks. Because her pose and form were so simple, it let me really focus on the background.

In comparison, the pictures I struggled most with were the ones with multiple fairies. Getting all the dynamics right and making the poses make sense (especially with the fairies lifting Gossamer) was a real challenge. Though I love how they all turned out in the end. 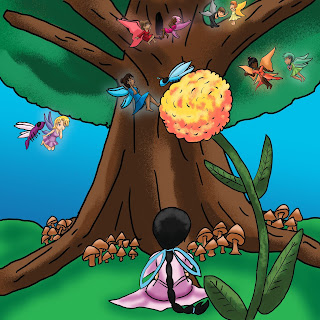 How do you nurture your creativity as an artist?

If we’re talking about just finding inspiration, that’s the easy part. It’s no secret that inspiration is easy to come by when you’re a nerd like me. I used to be an avid book reader. Graphic novels, manga, and webcomics are some of the media I indulge in now. I watch a lot of anime, cartoons, sci-fi shows, crime shows, documentaries, Let’s players, and movies. I also watch a lot of artist speed draws and various streams. I play video games of all shapes and sizes. When it was a bit more pleasant to go out in public, I was (and in the future still will be) a frequent visitor to the Yale Art Gallery and the Yale Center for British Art. They’re my favorite places to go when I need to chill and get out of the house. Heck, any museum is a pleasure for me to explore.

In terms of actually doing art? That’s a harder question to answer. I mean, art is hard. Writing is hard. Everything in the creative sphere is hard. It’s even harder when you look at all the amazing things that other people have created, especially if you happen to have the kind of talented friends I do.

I have a few theories about what keeps me creating. One thing is my oddly competitive spirit. I mean, I don’t want to actually compete against other artists. That’s just silly. But I DO want to know I CAN do something — if that makes sense. I like to look at what other artists are doing and see if I can absorb their stylistic elements. Not copy, just get more artistic knowledge in my arsenal. Another reason I create is that I have too many thoughts in my head that just need to get out before I can focus. I have a lot of ideas. A LOT of ideas. Sometimes too many things are going through my head and I don’t know where to begin, but other times I just need to get it out in some way, even if it’s ranting to my friends about the things in my head. But my strongest motivation is because while creating is hard, the end result just feels so nice.  I like looking at the art I’ve done (even I do notice a ton of flaws in it). I like reading the stories or poems I write (even if there are typos I only find in the fifth re-read or think of a better way to word things after two re-reads). While it was a struggle getting there, for the past 9 years or so I’ve found I like what I make and that’s a reason to continue. Even if the creating is hard the end result is worth it.

If you could choose any artist (past or present) to paint your portrait, who would it be and why?

That’s a hard question, not because there are too many choices but because I don’t want someone to do my portrait. I’ve been weird about my own images getting out there for public viewing. If I had the chance to commission someone to do art for me though, I have a few people I definitely would commission. I’ll give you the top four. Three of whom I might ACTUALLY commission if I gain the money to do so (and they are open for it) at whatever point.

The first would be Van Gogh. I don’t even have a prompt for him, I just want to see what he’d choose himself and watch him sculpt the painting from the ground up. I say sculpt because if you EVER see any of his paintings in real life there’s a 3D element to it that’s just breathtaking. The paint literally pops off the page in his pictures and the layers of colors is just exquisite. The second would be Don Maitz. His fantasy art is just perfect, especially his dragons. Words cannot express how much I adore his dragons. He also tends to use such vivid colors, and I want to learn how he does what he does. If I commissioned him it would definitely be dragons-based, because not only do I love dragons, but his are just my style.

The third would be Dorothy Hall who used to live upstairs from me. My mom already owns some pieces of hers but that woman has a range of art that is exceptional. I don’t know what I’d commission her to do exactly. I’d probably see if there’s any media she’s been experimenting with and go from there. But I’ve always admired her work.

The fourth would be an artist named Wenqing Yan also known as Yuumei online. Her style is a mix of anime and painting that just warms my soul. I honestly don’t know what I would ask her to do specifically but honestly anything she creates would probably be something I’d like.

Where can people find your art?

I have a few places I post things to under the name “Ragond.” My website spiritsinc.weebly.com is a good place to jump from since I have it linked to all the social media I use, and the navigation can lead you not only to my galleries but things with my art you can purchase online (including our book).  You can follow my tumblr page ( ragond.tumblr.com ), although I tend to put my more finished pieces on my deviantart ( ragond.deviantart.com ). Trying to get into Instagram but tumblr is far more comfortable to me.

Posted by AnotherSarah at 11:13 AM No comments: