Happy Wednesday! Today's miniquotable brought to you by my favorite shady lady, the Glass Dryad, a dark sage who helps both villain and hero for the right price . . . . 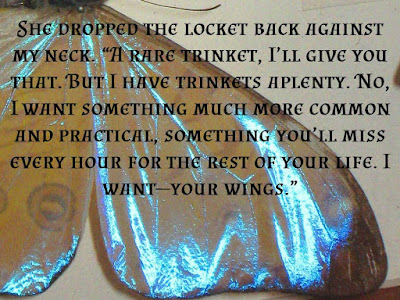 Posted by AnotherSarah at 6:49 AM No comments:

Deleted Scene: To Catch a Gnome

I am thrilled to announce that Iffy Magic has been officially nominated for a Whitney Award in the YA Speculative Fiction category! I received this nifty picture to share on my blog: 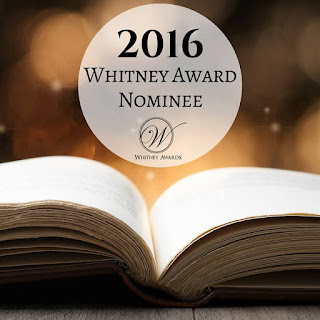 To celebrate, I'm sharing one of my favorite deleted scenes!

In the original draft of Iffy Magic, the enterprising gnome Snitchquick had a bit of a "grander" role . . . meaning he tagged along with Prim when she entered the Mortal Vale and wreaked absolute havoc on unsuspecting humans.


Calico curled around my ankles the instant I stepped outside. “You owe me some serious catnip!” he grumbled. “I think I burned out my sense of smell tracking down your stinker Snitchquick.”
“Well, where is he?” I demanded.
“Hiding somewhere in the peach orchard behind the cottage,” Calico said.
My eyes narrowed. “Then I’ll just have to flush him out.” Appendix B of the Pocketbook was devoted entirely to the management and containment of pestiferous magical creatures. If I recalled correctly—and I always did—the most common method of gnome-catching was to lay a trail of diamonds that led to a hidden ambush. It was gnomic nature to snatch all things shiny. By the time Snitchquick arrived at the ambush point, his arms would be so burdened with gems he wouldn’t be able to evade the wrath of my wand. At least, that was the idea—the only one I had.
“Keep close, but stay out of sight,” I whispered to Calico. Drawing my wand, I slipped silently into the peach orchard. The boughs were already spangled in dripping water gems. My own jewels tinkled as they slipped free from the tip of the wand and hit the wet ground. I added lavender spinel and aqua tourmaline, cloudy moonstone and darkly gleaming garnets, and luminous pink pearls as large as a dove’s egg. When I arrived at the heart of the orchard I sat on tree stump and waited. Patiently . . . for a few minutes. Not so patiently for a couple more. Come on, any time now. Nothing happened.
A voice behind me said slyly, “Miss me, pretty pixie?”
“Gotcha!” I whirled around to face Snitchquick. The gnome tottered on the branch of a peach tree under the weight of an enormous armful of jewels. My spell would’ve bound him in ivy vines to the tree trunk—if it weren’t for the sudden shower of gems that pelted me in the face and skewed my aim.
“Aye, you definitely missed me,” Snitchquick chuckled as he leapt to the safety of another peach tree. “Nice try, but did you honestly think a pile of magicked winkers would catch my eye?” He flicked a ruby at me. “Snitchquick is more into objects with the exciting aroma of a story about them.”
Silly me. I should’ve left him a trail of dirty socks.
Snitchquick appeared to have done quite well for himself since he hitched a ride with me to the Mortal Vale. He wore a fine linen table cloth draped across his shoulders like a cape and his long pointed ears waggled through Mayor Brunoldo’s white-plumed hat. Bright scarves and kerchiefs wound around his river reed tunic like a makeshift baldric. All together, his wardrobe looked like a cross between a lunatic pirate and a noblewoman’s laundry bag.
I pointed my wand squarely between his beady black eyes. “So you’ve had your bit of fun, but now it’s time to surrender my magic bean and take the nearest portal back to Faerie,” I said in my severest tone.
Snitchquick skittered behind the trunk of another peach tree. “Ahem,” he coughed delicately. “About the bean. I’m afraid I already traded it, so there’s no use demanding it back.”
A faint groan escaped my lips. Just splendid! Somewhere in the Mortal Vale, a magic bean could wreak havoc on somebody’s vegetable garden at any moment. I tried not to start as Calico leapt onto Snitchquick’s bough and snuck up stealthily behind him. Splendid. Now if I could only keep the nimble gnome distracted before he could make another escape attempt.
“Bean or no bean, you’re done making mischief in Shambley,” I said. The star sapphire thrummed as I funneled magic into the coregem.
“Don’t be doing anything hasty now,” Snitchquick said. “I played into your clumsy trap of my own free will, ’cause I believe we can come to some kind of a trade agreement, an understanding, if you will, between two respectable Faerie Folk— ” He squeaked as Calico pounced on him. A shower of peaches pummeled them both as Calico pinned Snitchquick to the ground.
“You crushed my feather!” Snitchquick said indignantly.
Alas, the gnome was correct. Mayor Brunoldo’s hat was quite crushed.
“Gross! You were right, Prim,” Calico said, spitting fibers of Snitchquick’s reed tunic from his mouth. “This fellow isn’t edible at all.”
Snitchquick’s smile was lined with pointed ivory. “But are you, kitty-cat?”
Calico gave a strangled hiss as Snitchquick twisted free of his grip and bit the end of his tail.
“Indigestible fiend! I’ll show you what real fangs feel like!” Calico streaked after Snitchquick in a lean blur of fur. The wily gnome dove into an adjacent barley field, the tall stalks shaking in a violent breeze as Calico followed close behind him.
I sighed. So much for taking care of my little gnome problem today.

If you'd like a free mp3 copy of the book trailer's "Glass Dryad Song" (sung and composed by the fabulous Audrey Bagley), email me and I will send you one!

I have paired a song with each chapter of Iffy Magic that I think matches the mood. Please check out and enjoy the gorgeous music by these artists!

Posted by AnotherSarah at 8:40 AM No comments: