This week I am proud to include a Character Interview of Iffy Magic’s very own Primrose Goodwing by Sadie St. Elle-Maid of the Faerie Era, the premier news folio in the Faerie Vale.

Prim: No thank you, I’m allergic to four-leaf clovers. What was I saying? Oh yes. Salutations! I’m Primrose Goodwing and I have a message from the Sponsor a Mortal Foundation—

St. Elle-Maid: A lovely hobby, to be sure—but Titania’s Toes! I just adore your shoes. The tiny gold Zanzibar bells on the curled tips are such a daring touch. Did you glamour up those little wonder soles yourself?

Prim: I’ve been conjuring shoes ever since I was little. My iffy magic often got me into trouble with my teachers, so I stared down at my feet quite a lot, but that gets rather boring, doesn’t it? Embellishing my slippers with a bit of sparkle became sort of a habit—ahem. But I’m actually here today to talk about how citizens of the Faerie Vale can help poor and afflicted mortals in desperate need of—”

St. Elle-Maid: That’s nice. Would you ever consider replicating the famed glass slippers that you made for your first mortal venture?

St. Elle-Maid: But would you consider trying?

St. Elle-Maid: Excellent, how exciting! You could name your shoe line after the first girl you made them for, what was it? Dear little Cinderbell.

St. Elle-Maid: Yes, that’s what I said. So how early before you can start taking orders? Faux glass slippers are all the rage at Faerie Court these days.

Prim: Never. And that’s not what I’m here to talk about. Right now, legions of mortals are suffering because they lack fairy godmothers—

St Elle-Maid: Your “Little Miss Pixie Perfect” act is charming, really. But rumor has it that your zeal for delivering happily-ever-afters is masking a dark and terrible secret.

St. Elle-Maid: Aha! You said it, not me. But even without your confession we have the testimonial of one Calla Lily, your former classmate at Meadowlark. She says and I quote, “Of course Primrose is all about keeping her pet humans happy. That way the dumb mortals don’t notice that she’s bleeding crystallized bliss from their hearts. It’s how she makes her precious glass slippers.”

Prim: Why that slimy, cross-eyed newt! She’s a liar—

Prim: You listen here, I only agreed to this interview because I thought I could share an important message. Once humans and Faerie Folk lived and worked side by side, but now contact between Vales is strictly regulated. And why? Because most humans are viewed as dangerous, dirty creatures unworthy of magic. We have forgotten the many times a single human has saved the Faerie Vale. Excalibur could never have existed without the heart of the mortal child Arthur. When we stop believing in humanity, we stop believing in ourselves. We squander our potential to do good in both worlds.

St. Elle-Maid: Bluebonnets! Your sweet little speech almost convinces me. I’m tearing in my left eye, truly I am. So how do I adopt one of these human creatures? And can you throw in a pair of glass slippers if I adopt two of them? 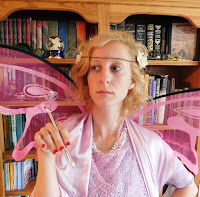 After a brief stint studying fashion at the Emperor’s Nouveau Clothing Academy, Sadie St. Elle-Maid earned her Silver Quill chronicling the Cobbler’s Strike of the Leprechaun Colonies. She has headed the Character Interview section of the Faerie Era for two centuries now and is widely regarded as the supreme icon of Faerie Court style.