Presenting Something Supremely Silly...in which I dabble in ACNH fanfiction because gyroids are awesome! 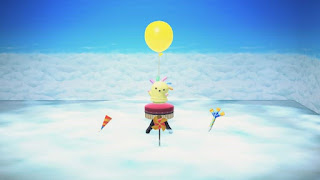 At midnight, when the almighty island resident had finally logged off her cyber kingdom, the four squeakoids of Mirage stole away from their designated posts. Mr. Salutations, Lady Pinkerton, Squeaksalot and Waverly assembled in the heart of the rock garden for their usual secret meeting.

“Why does the Brewstoid get all the squeaking glory?” Mr. Salutations grumbled. “I greet the visitors at the airport, so you’d think I’d get a stately seat to park my keister. But no, Tiny B gets a plush velvet stool and an entire café with his own owl-faced cookies right next to the fashionable Able Sisters. Me, I don’t even get a proper furniture item! I have to sit atop a  . . . a squeaktacular bug crate (species: monarch butterfly).” His head fronds shook with the sheer humiliation of the situation. “Even a simple Zen cushion would be more dignified!”

“It’s really not that bad,” Waverly said. “I think Mistress Ellabelle meant for your post to be whimsical. Like, welcome to the isle of wings and a thousand wishful things—”

“Oh squeak off,” Mr. Salutations interrupted. “At least you’ve got your own karaoke corner in a prime location by Resident Services with proportional adorbs factor: a desktop mic just your height, and an adjacent cute radio with a customized dance tile to lure in villagers to sing with you.”

“I know, right?” Waverly preened with a toss of her rainbow head fronds. “I’m super squeaktastical! Although, it would be nice if I had some stage lights—”

“Pipe down, you two.” Lady Pinkerton raised a squeak of her own. “If anyone should squee their displeasure, it’s me. I’m just a pink wall accessory in a pink cherry blossom room all a-glow with PINK star garland lighting.” Her head fronds shuddered. “I all but bleeeend away into a sickening pink oblivion . . .“

Mr. Salutations reached out a consoling hand blob and patted her on the back. “We’re practically invisible, aren’t we?”

“Nah,” Squeaksalot objected. “You guys just need to amp your squeak up to max RAWR! Look at me: I sit in the middle of a vegetable plot. I’m half-hidden by sugar cane and tomatoes, but I don’t let that stop me from guarding the cyberveggies of Mirage with totally squeaksome terror. Gotta keep that dang diglett Mr. Resetti out of the potatoes, the sneaky bunny garden decorations out of the carrots, and the illuminated deer herds? Out of everything else. Get my squeak, squeakums?”

Mr. Salutations chuckled darkly. “I like your style. Maybe it is time for a little rawr of rebellion! We need to make the Island Resident listen to our grievances. What if we bury pitfall seeds all around Mistress Ellabelle’s house? Get her stuck in a squiggle loop in the dirt until she surrenders, and bestows us all with swanky velvet stools!”

Waverly rolled her head fronds in derision. “Don’t be such a squebe, or Mistress Ellabelle might think the game is glitching and reset it.”

“There are far better ways to achieve our goal,” Lady Pinkerton admonished the squickering pair. “I heard that Mistress Ellabelle desperately wants to win a dream tour with the renowned YouTuber, Britney of Bonsai Bay or some-such. If we sabotage the island—a dropped item here, maybe an extra stick there—it won’t be long before Mirage loses its precious five star rating.”

Waverly gasped. “But . . . if our isle drops to four stars, the Lilies of the Valley won’t sprout anymore.”

“M’lady, you’re squilliant!” Mr. Salutations said. “If we pick up all the seashells and then drop them back on the shoreline, they will count as dropped items against the 5 star rating. But I doubt Mistress Ellabelle will ever guess that the shells have been tampered with—squee-hee-hee-ha!”

“What’s in your little squebellion for me?” Squeaksalot demanded. “If I help you, do you think Mistress Ellabelle might reassign Redd’s pirate cannon to the garden plot?” He struck a fierce squigglesome pose. “Then I can blow any intruders clear off the farm!”

Waverly cleared her throat with a tiny trill. “And, do you think I might ask about that stage lighting?”

“Of course—follow my lead, and we shall acquire everything our mysterious gyroid hearts desire,” Lady Pinkerton assured her fellow squeakoids. “Meeting adjourned.” 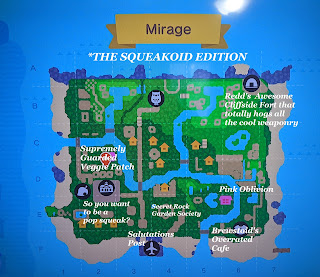 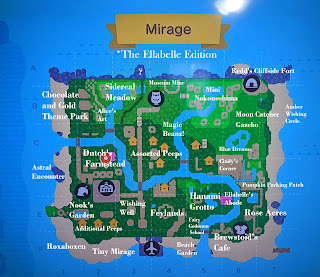 Posted by AnotherSarah at 5:22 PM