After I finished Iffy Magic, I intended to write a prequel covering the notorious rise and fall of Zenaides from respectable Goodwing godmother to wicked fairy. Other stories got in the way and I never got past the first chapter. But . . . for all you loyal Iffy Magic readers, I present the glorious character art by Audrey Bagley, and the rough draft of the beginning to Ace of Jinx: Confessions of a Pernicious Pixie! I hope to finish the story one day . . . .

Rosebud spent the last sixteen years of her life avoiding her birthright to join the prestigious Goodwing rank of fairy godmothers. She has no desire to ever enter the dangerous Mortal Vale after both her parents were murdered there. All that changes when she learns that whoever serves as Princess Elspeth's fairy godmother for ten years will receive a rare Asterix wand.

But Rosebud soon discovers that Elspeth toys with her subjects' lives and is utterly undeserving of her magical services. Yet when she reveals her princess's treachery to her superiors, Rosebud is ordered to overlook her behavior in order to preserve a trade agreement that gives the Goodwing family exclusive rights to a powerful cache of Asterix gems.

When the mysterious Granny Toad offers Rosebud an Ace of Jinx, the calling card of wicked fairies, Rosebud accepts the challenge. Defying orders, Rosebud pairs up with a rakish outlaw, the half-dragon Oriole, and begins secretly marauding as the wicked fairy "Zenaides" in order to disrupt Elspeth's corruption. Too bad her alter ego Zenaides attracts the attention of officers of the Fairy Court, including her fiancé Captain Florian Sorrel. Rosebud must make a choice: to bow to tradition or write her own fairy tale.

Discover the notorious rise and fall of a promising young fairy godmother who sacrifices everything in order to save mortals and monsters deemed unworthy of magic's help! 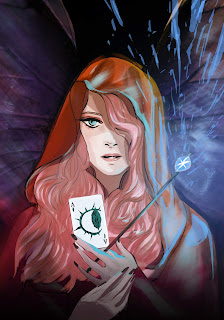