A Fair Account of the Traitors Snow White and Rose Red

I am thrilled to announce the release of my third foray into the world of fairy tales, A Fair Account of the Traitors Snow White and Rose Red! I absolutely adore the gorgeous cover by Audrey Bagley: 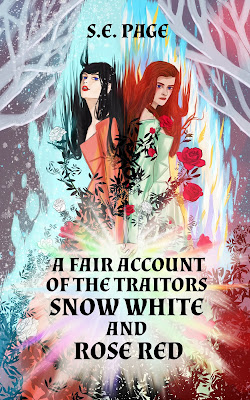 Purchase paperback and get ebook for free!

My star-crossed retelling blends the more well-known tale of Snow White, the huntsman, and the poison apple with the lesser known tale of Snow White and her little sister Rose Red, the dwarf and the enchanted bear. I started inking this frost-laced story in 2012, and it spent many years on the sea of submissions. I am proud after years of multitudinous rejections and rigorous revisions to finally present it to readers. I owe many thanks to my little sister Mary for her grueling revision sessions that helped me to polish this fallen star to a shine. I hope you enjoy Rosavere and Snow White's misadventures!