Stellify: The Princess and the Troll Tiara

When I was a child, there was a period of a few years when my mother would have me write a new story and poem each week. I wanted to try and catch some of that magic again! 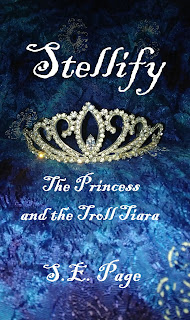 So I started a new Wattpad story, Stellify: The Princess and the Troll Tiara.


For centuries, humans have hunted the trolls of the Sidral Mountains and forced them to petrify in daylight so they can harvest the prized stelliferite crystals in their heart. But Geode refuses to let anyone from her tribe be slaughtered ever again. Haunted by the death of her mother at the hands of human hunters, she vows to kill any who dare enter her territory.


The attacks on the trolls only increase when Princess Seleni demands a magnificent bridal tiara made of stelliferite from her suitors. Yet when Geode finds the injured Prince Ivan the Younger in her woods, she forges an unlikely friendship with her first human.
Together, Geode and Ivan must find a way to break this heinous tradition and avoid the traps of Captain Merek, the cunning human who hunted down Geode’s mother and now schemes to win Princess Seleni’s hand in marriage.

*Stellify means "to change or be changed into a star."

Hope you enjoy the weekly installments!