I include my favorite poem by Emily Dickinson in the preface to Iffy Magic: 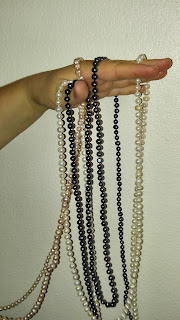 We play at Paste—
Till qualified, for Pearl—
Then, drop the Paste—
And deem ourself a fool—

The idea that a stubborn little grit of sand can become pearled with persistent effort and time is at the heart of all Prim’s dreams. She isn’t a whiz with a wand.  Every effort she makes to move on from weak ephemera to a proper glamour is mired in ignominious failure. But she doesn’t give up on her magic, because “gem-tactics” arise from more than easy talent. Likewise, faux can truly be fair in essence if not reality—the poor paste strand of pearls adults call trash, children name treasure.

May I just add that I adore Dickinson’s penchant for the em dash? Each sentence slides like a cloud off the tongue when spoken! Read it aloud and try the poem out for yourself.

Posted by AnotherSarah at 12:00 AM